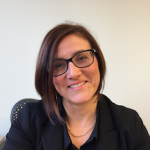 ASSOVIB renewed corporate offices and membership. The Association keeps specific focus on property valuation and independence from other sectors and interests. Roberta Brunelli, General Manager of AMT Mortgage Insurance (previously known as Genworth Financial Mortgage Insurance), has been appointed President.
The new presidency is therefore expression of one of the market stakeholders, demonstrating the relevance given to the independency of valuations issue. AMT Mortgage Insurance will continue to be ASSOVIB observing member.
Silvia Cappelli – representing the Association in International boards among which the TEGoVA one and European Mortgage Federation Valuation Commitee – has been confirmed Vicepresident. Valter Prete becomes Secretary, while Francesco Simone takes for the first time the responsibility of Technical Scientific Committee. Corporate offices renewal comes up with changes in the membership, which has seen from one side some former members to choose other paths of representation and the joining of new members from the other.